A controversy raged in the press since the announcement in 1992 that a group of women at North Vancouver’s Capilano College were organizing a Vancouver monument dedicated to the fourteen women murdered at L’Ecole Polytechnique. Over a hundred news items were generated before the piece was even installed. The bulk of the fuss seemed directly connected to the proposed inscription:

The fourteen women named here were murdered December 6, 1989, University of Montreal. We, their sisters and brothers, remember and work for a better world. In memory and in grief for all the women murdered by men. For women of all countries, all classes, all ages, all colours.

A Reform MP, several journalists, and numerous letters to newspapers all took umbrage specifically with the words “women murdered by men.”

More than this one aspect, people also debated the favourite topics related to public art: funding, process, location, and the appropriate role of such objects. The Reform MP publicized his move to block a tiny staffing grant while letters fumed that public money should not be spent on art for “special interest groups” such as feminists. Articles evaluated the selection of a site, the civic allowance of the inscription, and the women-only rule for the submissions and the jury. Framing the whole event, the existence of this furor was explained and celebrated because it happened in the name of public art. 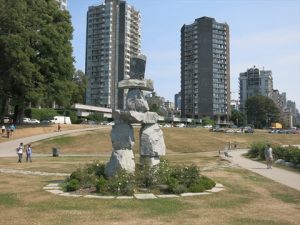 Responses implied that the project was a success long before it was produced. After all, just the idea of creating such a monument resulted in the issue of male violence against women receiving bountiful press attention. However, the project committee repeatedly stated that their goal was to commemorate the fourteen women whose names are too easily forgotten and to create a place in Vancouver for contemplation and mourning of violence against women. In 1994 they selected Toronto silversmith Beth Alber’s project, Marker of Change, but had to wait until the full $300,000 budget was raised in order to produce the work. Officially unveiled December 6, 1997, Marker of Change proves its success by subverting the fuss and complaints.

Alber’s design is effective in its simplicity. She subtly alters the components of a traditional monument to work with both the specific subject of the fourteen massacred women and also with the larger notion of a site for collective grief. The piece consists of fourteen benches made of warm, pink, construction-grade, Quebec granite that are arranged within a three-hundred-foot circle. The benches are five-and-a-half feet long and bear the name of one of the students on its inner face. As well, the centre of the top face has a shallow, rough indentation which will fill with Vancouver’s copious rain. Each in a different language, the much discussed dedication appears on the outside face of seven of the benches (with the other seven left blank). A continuous ring of paving bricks, inscribed with dedications and contributors’ names, forms a second, outer circle.

Beyond the specific press controversy, Marker of Change has to respond to the interrogation of the whole notion of monuments. Opponents argued that it was inappropriate for a feminist project to replicate the traditional, permanent monument form. Another line of attack claims that the money for the monument would be better spent on direct aid services because public art is meaningless in today’s society. Supposedly, people ignore this kind of work and therefore it does not affect public consciousness. Yet, if this is true, then why is the project the focus of a virulent, five-year-long debate? One answer lies with looking at the goals for the monument that went unaddressed in the media furor. As Marita Sturken argues in Tangled Memories: The Vietnam War, the AIDS Epidemic, and the Politics of Remembering (1997), memory establishes life’s continuity, it gives meaning to the present and provides the very core of identity. Different than either personal memory or history, it is cultural memory and cultural identity which is marked through public memorials. 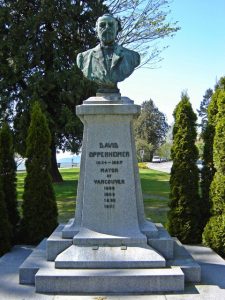 While there has been a justified critique of the “general on a horse” style of public monuments, the stakes shift when the public work memorializes a group or identity absent from such works. The women’s monument committee repeatedly pointed out that a driving force behind the project was their effort to redress the virtual non-existence of public monuments in Vancouver that directly relate to women. Instead of a single sculpture plopped into a park, the arrangement of the fourteen granite benches creates the potential for a gathering place. The circular plan evokes a feminist style of meeting as well as rituals for healing and the indentations for rain water symbolize vessels to collect tears. Alber designed the dimensions and horizontal orientation of the benches to reference the fallen bodies, yet the size and arrangement of the works also invites visitors to sit and to look around at the rest of the site.