The exhibition space, a darkened room, immediately presents the approach to the work, the approach to visibility, as a practical task. Gallery lighting flashed on abruptly: my movement had triggered a controlling device. The lighting is now somehow an aspect or a dimension of the work, having become an explicit feature rather than a convention. Again, darkness, and a chance to notice strange glowing ellipses on each wall. More movements produced more lighting, enough to discover the device, its manner of operation and the movements required to manipulate it. A certain stability was established and I felt able to begin a more typical viewing of K = Infinity, an installation by Kevin (ei-ichi) deForest. 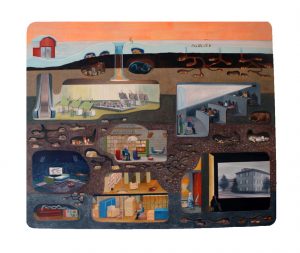 It is a complicated and engaging space deForest has created using such oddball things as obsolete record turntables, paintings and a large pink “doll.” There are two turntables, each with an old vinyl LP sitting ready for play. The label of one LP identifies a recording of a composition by Erik Satie, while the other is titled “Horny Remixes,” and it may be their respective irreverence which ties them into this installation. The “doll” or toy is a spherical body (or head) about waist high for me, pink, plasticene covered, with two eyeballs that demarcate a facial aspect. However, only one of the eyeballs has a pupil while the other remains white. Perhaps even more interesting, the “face” of the doll is a TV shaped concavity. The eyes sit staring out of this screen, returning my gaze.

The turntables, wires and doll occupy the space in a practical sense, that is, they direct how I move around the space. Most importantly, they disrupt any easy access to the paintings on the walls. I am tempted to write “paintings” because these seem either less or more than “real” paintings. They are however definitely in the place of paintings and are made more or less typically but for having rounded corners like the TV doll’s face. Perhaps these paintings are a little like television sets. Looking obliquely at the vinyl LPs resting on their turntables, each LP is visually an ellipse unless one stands directly above the turntable and this ellipse shape is picked up in the paintings. Placed on an obliquely receding grid, the ellipses in the paintings resemble a pond with lily pads, but also the ellipses representing the vehicles popularly called “flying saucers” or “UFOS,” and also, the patterns of light and other decorative devices used in disco bars. And continuing the decor scheme, these paintings gather light and glow in the dark: phosphorescent, this glow is reminiscent of Ushio Shinohara’s fluorescent paintings of the mid-1960s. And, after all, Shinohara did, in good Warholian fashion, propose that imitation is something ultimate in our age.

The dystopic Minimalism of deForest’s paintings adapts aspects of Systems Art of the 1960s, especially the kitsch dimension of Victor Vasarely and Tadaaka Kuwayama, both of whom were in Lawrence Alloway’s “Systematic Painting” show at the Guggenheim. deForest’s paintings are peculiarly persistent, lingering in my memory long after the exhibition. The imagery is oddly familiar, having a sense of deja vu, unplaceable except for its adoption of imagery found in media, imagery that in its original context, perhaps 1950s science fiction, was quite simply boring. deForest’s play with the familiar is as an excess which turns the banal, paradoxically, into a remarkable perception of the uncanny.

Paintings that glow in the dark belong to kitsch as does the pink “sculpture” which sits on the floor, and deForest uses kitsch as he does the darkness to play with the distancing which is often part of our interactions with artworks. It also disrupts the stereotype of Japanese art as being fragile, restrained and formalist. Insofar as deForest’s work is concerned with issues, it is involved with the ongoing dialogue between traditional and contemporary styles – and between international and Japanese identities. However, there is a dimension to the work that renders it irreducible to issues or debate, and this dimension resides in the complexities of resistant subjectivity which we encounter here as the experience of otherness and difference. These are the factors of hybridity in deForest’s disruptive and amusing challenge to the stereotype of Japanese identity.

Paint My Photo’s exhibition of family portrait painting also functions in the installation mode, composed as it is of multi-panel groupings. A long line of portraits, the work Matinee Idols joins images of young Asian men to corporate logos based on male first names such as Calvin, Tim, Bud, Vidal and so on. Each is on a separate panel, paired, image on one and logo on another, image above, logo below. The portrait panels are shiny enamel on board, painted in “graphic illustration” style. Each image presents a “pose,” a stereotyped or frozen likeness of a type. The stereotype, a plate from which copies are made, functions as an original in the sense of role model in relation to behaviour and attitudes. Here, the relationships formed by the work include the situation of commodities in the marketplace, of globalization with respect to production and the marketing of the “homeless” or nomadic commodity as a source of “original” identities which can be adopted cross-culturally.

A second series of portrait panels extends across another wall. Again male Asians, again stock images. Men, young to middleaged, white shirts and ties, eyeglasses, and painted using the strategy of the readymade in relation to portrait commissions, as in Matinee Idols. In this series however, the painted surface is dull, matte, where Matinee Idols was absolutely shiny. This is as it should be if the point is to push the stereotype that businessmen apparently prefer anonymity (the better to “operate”) whereas movie stars require shine and sparkle. 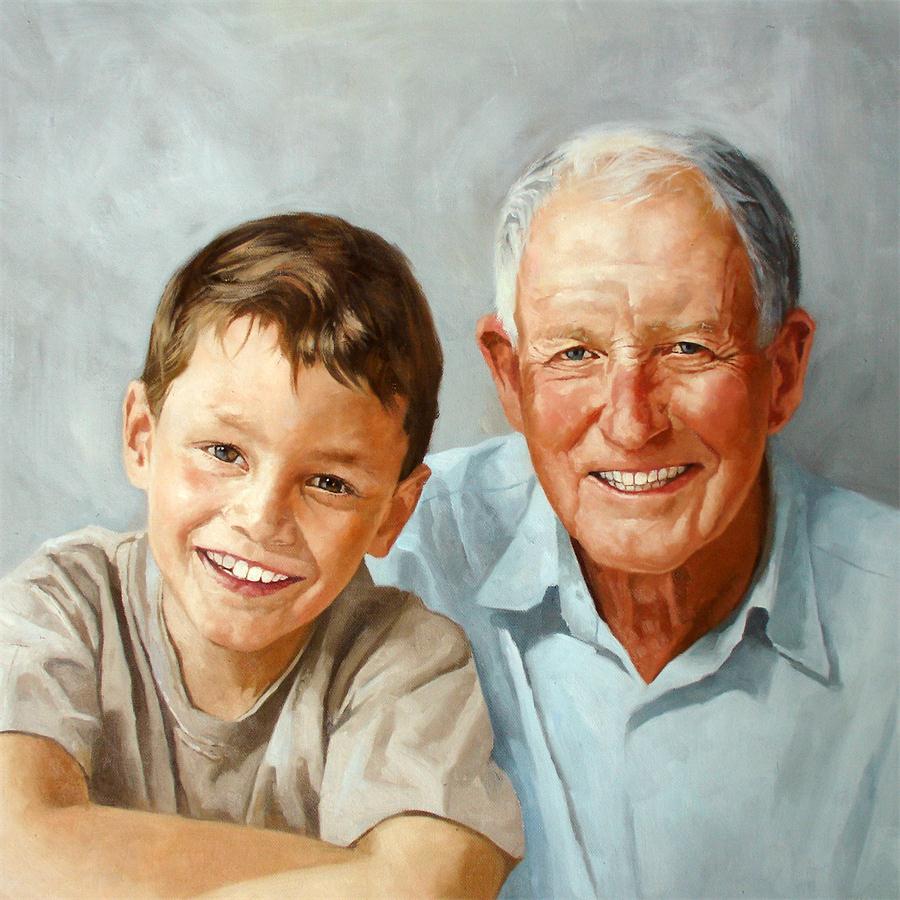 A third series, this time not portraits but close-ups of male genitalia, focuses on the feel of hype; here the logos and brand names of various familiar products: Royale, Glad, Excel, Extra, Equal. Each logo is alone on a panel and the panels are interspersed in a grid format with the genitalia images.

The long rows of portraits present the problem of “the lookalike,” which is the issue of positionality. Here we are asked to consider our own positionality, the positionality of the gallery audience (predominantly white) in relation to that of the portrait series but also to ponder the artist’s own questioning of his position vis-a-vis his role within the prevailing art system. That is, is “Ho Tam” with the portraits, or with the viewers, or both, and what assumptions have been made by the artist regarding the positionality of his viewers? Working within the context of cultural identity and race issues Ho Tam diligently and critically poses these questions. As is often the case, the self-conscious pursuit of artistic authority tends to undermine the possibility of any encounter with new forms of subjectivity and this might be a requirement of an art dealing with issues of difference as does this exhibition of paintings.